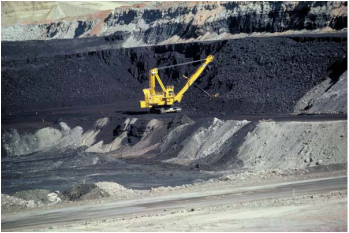 Photo: Wikipedia
Strip mining is a type of surface mining where the overlying vegetation, rock, and soil (overburden) is removed in order to reach the underlying coal seam, which usually lies a few feet beneath the surface.  Explosives are used to fracture any overlying rock, and then heavy machinery is used to remove the overburden and dump it into a nearby area.  Mining is done in long, narrow strips, thus the name “strip mining”.  Strip mining presents many different problems, including the destruction of ecosystems through removal of vegetation and dumping into streams (such as in mountaintop removal mining), problems with blasting damage and noise pollution, flooding, the extreme hazards presented by the impoundment of wastes generated from processing the coal on-site (see: coal slurry impoundments), and irresponsible mining reclamation practices.

Strip mining directly impacts some of the most biodiverse regions in the United States, if not the world.  Strip mining, as it removes enormous quantities of vegetation and frequently dumps it, along with topsoil and rock, into streams and rivers and sometimes threatens endangered species of land and aquatic animals in areas that have been designated “hot spots for rarity and richness” (NatureServe).  Because large areas of vegetation have been removed, flash floods frequently occur as normal, mature forests typically absorb up to 75% of rainfall (wikipedia: strip mining).  One particularly devastating flash flood that killed 8 people in West Virginia occurred in 2002 as a result of the lack of vegetation due to strip mining.  Blasting damage to persons and property have also occurred (see:  blasting) as explosives are detonated to fracture rock that overlies the coal seam, and heavy machinery and explosions cause an incredible amount of noise pollution.

Coal production in the northern plains region that stretches from eastern Wyoming and Montana into western North Dakota is rising recently, particularly in the areas referred to as the Powder River Basin (PRB) and Fort Union Formation.  Even as nationwide attempts to halt construction of new coal-fired power plants gain traction, more and more greenhouse gas-intensive coal emerges from PRB and Ft. Union strip mines every year, destroying aquifers and reducing the productive value of farmland along the way.

These coal resources have been mined to some extent since the early days of white settlement in these areas.  The PRB of northeastern Wyoming and southeastern Montana is about 120 miles east to west and 200 miles north to south, a sparsely populated, semi-arid high plains topography. The Ft. Union Formation is the largest coal reserve in the continental U.S., straddling the border region of Montana, North Dakota and South Dakota.

Although sub-bituminous and lignite have relatively low energy values as compared to coals mined in the eastern U.S., they are plentiful and relatively easy to mine.  Should enrichment of western coals become more common, production could increase even more rapidly, along with greenhouse gas impacts.

The lower the energy value of coal, the larger the quantity that must be burned to achieve the same heat rate, and the more carbon ultimately released.

In fall 2008, GTL Energy began work on a new type of coal preparation plant with technology that could open up North Dakota’s coal fields to massive new development and the threat of aquifer destruction. An Australian company recently proposed a similar plant in Montana, in the PRB.  Coal preparation plants are an integral part of the coal mining industry. State, and federal laws regulate these plants because they can harm soil and water.

In January 2009, on behalf of landowners and the Dakota Resource Council, Plains Justice filed a complaint against GTL with North Dakota mining regulators.  GTL never obtained a surface coal mining operation permit that would require cleaner operation and a return of the land to productive use once mining is over.  They have also filed a Freedom of Information Act request for details about the Montana proposal.

The coal industry is very powerful, and in the absence of strong laws and diligent enforcement, leaves behind ravaged land, drained water resources and human suffering. Plains Justice is working with landowners and other allies to make sure that laws to prevent this are enforced fully.