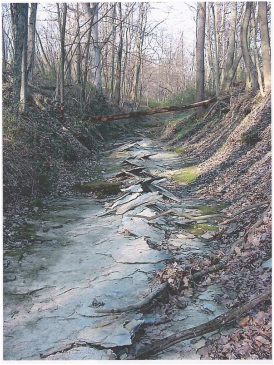 A stream bed impacted by longwall mining.
Longwall mining was first introduced in the United States in the early 1950s and was more frequently used in the late 1970s. Today longwall mining accounts for about one-third of total underground coal tonnage. This is accomplished because of the increased production from longwall mining, an underground mining technique that removes entire seams of coal, leaving none of the pillars for support that are found in more conventional mining techniques.  Longwall mining, a type of practice consider “full extraction” nets more coal with fewer miners than traditional techniques and causes extensive damage to residences and water supplies of those living above the mines.Longwall machines use self-advancing hydraulic systems to keep the mine roof from collapsing as a rotating cutter runs along the coal face, breaking away coal that falls onto a conveyor belt and is transported to the surface. The longwall machine’s mine the coal in horizontal, “panels” that are 800 to 1,500 feet wide and 2 to 3 miles long.  In longwall mines as the temporary support protecting the miners is advanced, the roof in the mined-out area behind it collapse causing cracks and rock movement that reaches to the land surface hundreds of feet above. At any time, land above the underground mine may sink, rise, or move sideways, causing buildings to crack, roads to split, or the earth to break open.  This movement of the land surface above a mine is called “subsidence”.

Underground mining can also disrupt water flows – both surface and groundwater.  Streams and ponds can disappear into cracks in the earth caused by subsidence, and mining can reduce or eliminate groundwater supplies feeding wells and springs.  In some areas, the disruption causes flooding on previously dry land.  Water supplies may also be polluted by iron, sulfur, methane gas or other contaminants.  Many of these problems are more severe from longwall mining than from other types of underground mining.

Supports placed under house to “mitigate” damage from mining. Subsidence damage can occur years after the mining machine passes under.

Longwall mining causes environmental destruction that is not adequately recognized, analyzed, minimized, or compensated – despite an existing regulatory process that is supposed to protect the environment. There is a widespread concern among residents of the coalfields and in the environmental community that mining regulations is not effectively protecting public resources and privately owned surface resources when coal is removed and prepared for market.